The 2015 annual meeting of the American Society of Clinical Oncology (ASCO) drew about 30,000 cancer specialists to Chicago May 29 – June 2 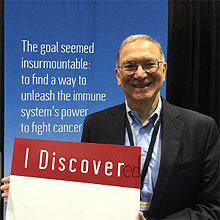 Discoveries by Dana-Farber’s Gordon Freeman, PhD, are uncovering cancer’s interactions with the immune system, leading to tests of potential new therapies for patients

The 2015 annual meeting of the American Society of Clinical Oncology (ASCO) drew about 30,000 cancer specialists to Chicago May 29 – June 2.

Results of a new study could reassure cancer survivors that their chemotherapy won’t lead to genetic damage in children they conceive later.

Eliezer Van Allen, MD, and Mary-Ellen Taplin, MD, of Dana-Farber led a study using whole-genome sequencing to look for signs of genetic damage in two male cancer survivors and their offspring. The men had been cured of testicular cancer with combination chemotherapy, and both had children that were conceived before and after their treatment.

Obtaining DNA from saliva samples of the survivors and their offspring, the researchers scanned their genomes for signs of mutations and other DNA abnormalities. Van Allen reported that there was no increase in such abnormalities in the DNA of children whose fathers had undergone chemotherapy.

Vaccines to Treat Brain Tumors
David A. Reardon, MD, clinical director of Dana-Farber/Brigham and Women’s Cancer Center’s Center for Neuro-Oncology, reported that an experimental vaccine combined with standard therapy continues to show an overall survival advantage in patients with glioblastoma whose tumors carry an EGFRvIII mutation.

“These data are compelling. They’re not a home run by any means, but they’re certainly a solid single, maybe even a double,” commented Reardon.