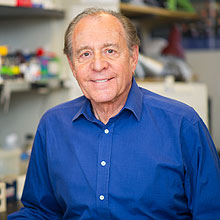 New research by Dana-Farber Cancer Institute scientists raises the prospect of cancer therapy that works by converting a tumor’s best friends in the immune system into its gravest enemies.

In a study published in the journal Science, an international collaboration of investigators from Dana-Farber, Harvard Medical School, Boston Children’s Hospital, and the University of Strasbourg uncovered a mechanism that allows key immune system cells to keep a steady rein on their more belligerent brother cells, thereby protecting normal, healthy tissue from assault. The discovery has powerful implications for cancer, immunotherapy researchers say: by blocking the mechanism with a drug, it may be possible to turn the attack-suppressing cells into tumor-attacking cells.

"Our findings suggest a new strategy for immune system-based therapies for cancer,” said the study’s senior author, Harvey Cantor, MD, of Dana-Farber and Harvard. “By targeting a genetic pathway in cells that ordinarily restrain the immune response to cancer, we may be able to convert them into cancer fighters. The challenge now is to develop antibodies and small-molecule drugs that can trigger that change."

The study grew out of a desire to understand the biology behind a basic part of the immune response. In reaction to infection or inflammation, immune system cells known as effector T cells (Teffs) undergo rapid changes – arming themselves and diversifying into groups that target specific diseased cells. A second type of immune system cell, called regulatory T cells (Tregs), are a model of constancy, remaining stable even as Teffs go into battle mode. Such persistence is critical, as Tregs’ role is to keep Teffs under control and prevent them from damaging normal tissue.

Cantor and his associates set out to discover how Tregs maintain their stoic stability. They noted that Tregs generally had high levels of a protein called Helios, a transcription factor that helps switch genes on and off. They then discovered that Tregs with low levels of Helios were rather unstable – too unsteady to keep the immune response in check.

When they examined mice genetically incapable of producing Helios, they found the animals beset by a T-cell and antibody attack on normal tissue. Not only that, but the animals’ Tregs had become Teffs and joined the immune system assault.

With Nicholas Haining, BCh, BM, of Dana-Farber and Boston Children’s Hospital, the investigators found that Helios exerts its stabilizing effect by upregulating – increasing the activity of – a series of genes known as the STAT5 pathway.

Since the completion of the study, Cantor and his colleagues have begun investigating whether their findings could be applied to the treatment of cancer.

Cantor remarked, "The aim of current approaches is to eliminate Tregs, and thereby increase anti-tumor immunity. Our findings raise the possibility of achieving a double-barreled effect – by targeting Helios, we may not only reduce the number of Tregs but also convert surviving Tregs into Teffs."

Cantor and his colleagues are now exploring that possibility. Experiments in mice injected with metastatic melanoma cells show that animals unable to produce Helios developed far fewer cancerous nodules in their lungs than normal mice did, and survived far longer. The results indicate that while Tregs in the tumors of Helios-lacking mice underwent conversion, Tregs in the rest of the animals’ tissues remained stable.

The inflammatory conditions within many tumors may allow Tregs to concentrate there, dampening the Teffs’ response to the cancer, Cantor explains. Helios reduction by targeted therapy or genetic expression results in conversion of Tregs to Teffs that is generally limited to the tumor, producing fewer immune-related side effects.

"The next step is to identify antibodies and small-molecule drugs that can uccessfully target Helios or genes in the Helios pathway"” said the study’s lead author, Hye-Jung Kim, PhD, of Dana-Farber. "We are currently testing a variety of such agents."