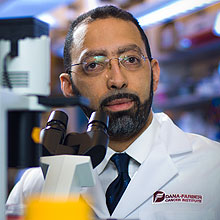 The Howard Hughes Medical Institute (HHMI) announced today that Levi Garraway, MD, PhD, medical oncologist at Dana-Farber Cancer Institute and associate professor of medicine at Harvard Medical School will become an HHMI investigator and will receive the flexible support necessary to move his research in creative new directions. The program represents an investment in basic biomedical research of $153 million over the next five years.

Garraway joins 25 other new HHMI investigators who were selected for their individual scientific excellence from a group of 894 eligible applicants. HHMI will provide each investigator with his or her full salary, benefits, and a research budget over their initial five-year appointment. HHMI will also cover other expenses, including research space and the purchase of critical equipment. Their appointment may be renewed for additional five-year terms, each contingent on a successful scientific review.

Garraway conducts detailed studies to reveal how genetic and molecular alterations that lurk inside tumor cells cause cancers to grow and spread—and how this knowledge might lead to new, more precise therapies for cancer. His team’s studies of melanoma and prostate cancers have turned up entirely new classes of cancer-causing genes. Garraway’s research group was also the first to identify prevalent cancer-promoting mutations in parts of the genome that do not encode proteins. Garraway is focused on learning how tumors become resistant to cancer drugs. He and his colleagues have used systematic genetic screens to identify the ways in which cells are most likely to become resistant to targeted therapies. These findings are informing the design of clinical trials to evaluate combination therapies for melanoma and other cancers.

Garraway is the director of the Center for Cancer Precision Medicine at Dana-Farber, Brigham and Women’s Hospital, and the Broad Institute. His team has adapted genomic technologies to survey patients’ tumors for hundreds of cancer gene alterations, creating tumor profiles that can be used to identify the best candidates for clinical trials and, in the future, tailor treatments to individual patients.

“Scientific discovery requires original thinking and creativity,” says HHMI President Robert Tjian. “Every scientist selected has demonstrated these qualities. One of the most important things we can do at HHMI is to continue to support and encourage the best discovery research. We don’t know this for certain, but the ideas that emerge from these labs might one day change the world, and it’s our privilege to help make that happen.”

HHMI encourages its investigators to push their research fields into new areas of inquiry. By employing scientists as HHMI investigators — rather than awarding them research grants — the Institute is guided by the principle of “people, not projects.” HHMI investigators have the freedom to explore and, if necessary, to change direction in their research. Moreover, they have support to follow their ideas through to fruition — even if that process takes many years.

The new HHMI investigators are expected to begin their appointments in September 2015.