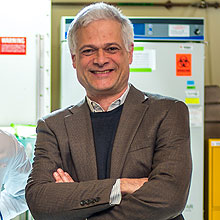 Alan D’Andrea, MD, co-director of the Gene Therapy Center at Dana-Farber Cancer Institute, will lead the Dream Team. Elizabeth M. Swisher, MD, professor in the Department of Obstetrics and Gynecology at the University of Washington in Seattle, will be co-leader. Other Dana-Farber researchers who will be involved in the project include Panos Konstantinopoulos, MD, PhD, Ursula Matulonis, MD, and Geoffrey Shapiro, MD, PhD.

The collaborating organizations will devote $6 million over three years to a project entitled “DNA Repair Therapies for Ovarian Cancer.” Ovarian cancer, which is treated in the Gynecologic Oncology Program at the Susan F. Smith Center for Women's Cancers at Dana-Farber, is the deadliest of all the gynecologic cancers. Approximately 22,000 women in the United States are diagnosed with ovarian cancer every year, and 14,000 die of the disease. The U.S. Food and Drug Administration (FDA) last year approved the drug olaparib to treat women with advanced ovarian cancer associated with defective BRCA genes, which are among a number of DNA repair genes identified as mutated in ovarian cancer. The existence of defects in DNA repair has emerged as a common weakness in ovarian cancer. By targeting DNA repair pathways, the Dream Team hopes to build and expand on the recent clinical advances seen with olaparib and other PARP inhibitors in current clinical trials.

“We now see defective DNA repair as a more general vulnerability of ovarian cancer,” said D’Andrea, a cancer biologist and expert in chromosome instability and DNA repair. “We hope to extend the use of PARP inhibitors to many other patients and find combinations with other drugs that will be effective against ovarian cancer.”

The team will also focus on prevention and early detection of ovarian cancer, which tends to be diagnosed at a late stage of the disease.

“We plan to develop a new web-based approach to genetic testing and counseling that will increase access to ovarian cancer risk assessment so women can take action if they are at high risk,” Swisher said. “This is a deadly disease that creates tremendous suffering. Prevention is critical because the mortality rate is so high. Ultimately, cancer prevention is one step better than cancer therapy.” A key feature of the prevention approach proposed by the Dream Team is to offer women identified as genetically high risk a choice of surgical options, including one that removes the fallopian tubes but spares the ovaries, thereby avoiding forced menopause, which many women find unacceptable.

“The Dream Team is capitalizing on recent advances in genetic research and ovarian cancer treatment,” said Arnold J. Levine, PhD, professor emeritus of systems biology at the Institute for Advanced Study in Princeton, New Jersey, and chairman of the SU2C-OCRF-OCNA-NOCC Joint Scientific Advisory Committee (JSAC). “We believe the team will make significant advances in the early detection and treatment of ovarian cancer.”

The project marks the first time that all three of the major ovarian cancer groups in the United States have come together to support a single research initiative.

“We’re thrilled to be funding this collaboration to bring new therapies and preventive measures to ovarian cancer,” said Audra Moran, president and CEO of Ovarian Cancer Research Fund. “This could be a game-changer for ovarian cancer research.”

“We are on the brink of new discoveries in ovarian cancer,” said Calaneet Balas, chief executive officer of the Ovarian Cancer National Alliance. “This project with Stand Up To Cancer is exactly what we need to have an impact on women’s lives.”

“Frankly, it’s been hard to see the needle move in ovarian cancer in recent years,” said David Barley, CEO of the National Ovarian Cancer Coalition. “We are very optimistic that this new collaboration will give us hope and optimism that this devastating disease can be overcome.”

The Dream Team, along with the Lung Cancer Dream Team also announced today, brings the total number of SU2C Dream Teams to 16. SU2C is a program of the Entertainment Industry Foundation (a 501(c)(3) charitable organization) that raises funds to accelerate the pace of research to get new therapies to patients quickly. SU2C has also funded translational research grants and made awards to individual investigators. In total, more than $370 million has been pledged to support SU2C’s groundbreaking cancer research since its inception in 2008.

“Ovarian cancer is so deadly; we are excited that this Dream Team will bring patient benefits not only in potential new treatments, but in developing a new approach to genetic testing and counseling,” said SU2C president and CEO Sung Poblete, PhD, RN. “This project will allow women at risk for ovarian cancer to secure genetic information so they can collaborate with their physician and family to consider their best treatment or prevention options.”