The event was broadcast live from Fenway Park on Tuesday, August 18 and Wednesday, August 19, from 6 a.m. to midnight. This year’s WEEI/NESN Jimmy Fund Radio-Telethon featured inspirational, emotional interviews with Dana-Farber patients about their experience with cancer, and insight from the doctors and nurses who have treated them. The event included commentary from several Red Sox players including David Ortiz, Dustin Pedroia, and 2015 Jimmy Fund Co-Captain Brock Holt. A group of Red Sox players’ wives also volunteered at the event by answering phones to accept contributions on the evening of Aug. 18, and by taking part in canister collections on August 19. Red Sox President/CEO Larry Lucchino, who is a former Dana-Farber patient, spoke about his treatment and the important relationship between the Red Sox and Jimmy Fund — one of the most remarkable partnerships between a team and a charity in the history of professional sports. 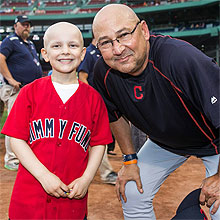 Cleveland Indians manager Terry Francona also appeared on air with Red Sox interim manager Torey Lovullo on August 19. Support for Red Sox Manager John Farrell - who announced his lymphoma diagnosis on August 14 and began treatment during Radio-Telethon - was a consistent and poignant theme throughout interviews with Red Sox players and management during the event.

Boston sports teams and well-known players called in or appeared to support the event with large gifts, including:

"Yet again, the members of WEEI Nation proved why they’re the most prideful, most responsive and most generous radio listeners in America," said Entercom New England VP/Market Manager Phil Zachary. "For two days they adopted hundreds of cancer patients as their own in a powerful rally of support for everyone involved with the Dana-Farber mission."

"We are humbled by the generosity and support from Red Sox fans throughout New England and across the country," said Sean McGrail, NESN President and CEO. "The talented and caring people at Dana-Farber and the courage of their patients inspire us and give us hope for the future that one day we will strike out cancer."

There were special on-field ceremonies prior to the start of each game against the Cleveland Indians. On the evening of August 18, the 2015 Boston Red Sox Jimmy Fund Award was presented to Robert Brack, of Concord, MA, chair of the Joan H. Brack Memorial Golf Tournament, for his support of Jimmy Fund Golf for more than 16 years. To throw out the ceremonial first pitch, Dana-Farber stem cell transplant patient Donnie Lewis, 56, of Canton, MA, and his stem cell donor, Daniel Alcantor, 21, of Annapolis, MD, strangers before the lifesaving procedure, met in person for the first time on-field and each threw out a pitch simultaneously to Jimmy Fund Co-Captains Brock Holt and Pablo Sandoval. The National Anthem was performed by singer/songwriter Alex Preston, an "American Idol" season 13 finalist from Mont Vernon, NH. Preston also sang "God Bless America" during the game.

On August 19, the evening’s ceremonial first pitch was thrown out by more than 15 pediatric cancer patients from Dana-Farber’s Jimmy Fund Clinic who attended this year’s annual Red Sox Spring Training trip to Fort Meyers, FL. The National Anthem was performed by Mark Giove, of Whitman. Mark’s son, Mason, 11, is being treated for a brain tumor at Dana-Farber. Joseph Letourneau, 23, of Goffstown, NH, sang "God Bless America" during the game. Joseph was treated for degeneration of the central nervous system associated with Histiocytosis X.

Dana-Farber pediatric and adult patients attended both games and took part in special on-field activities such as starting the game by exclaiming, "Play Ball," serving as bat boys and girls, and announcing batters. The event served as the highlight of "Jimmy Fund Month at Fenway Park," which is held each August in support and recognition of the Jimmy Fund’s mission.

For more information or to make an online gift to the 2015 WEEI/NESN Jimmy Fund Radio-Telethon presented by Arbella Insurance Foundation, please visit www.jimmyfundradiotelethon.org.