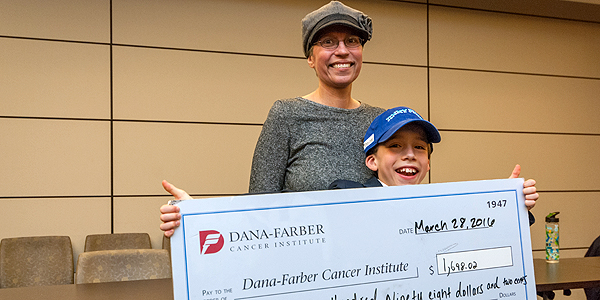 Zachary Lopes came through in a big way for his mother, Christine, and all Dana-Farber patients

Christine Jaworek-Lopes was moved when she believed her 9-year-old son, Zachary, was writing a school paper about her experiences as a stage IV colon cancer patient at Dana-Farber/Brigham and Women’s Cancer Center (DF/BWCC). Upon learning what he was really up to, she was stunned.

Unbeknownst to his parents, the third-grader spent a month organizing a campaign to honor his mother and raise colon cancer awareness and funds at Cedar Elementary School in Hanover, Mass. When Christine and her husband, Josh, discovered the full extent of Zach’s project, it had spread through the town’s entire public school system. The outpouring of support the family received culminated in a March 28 ceremony at which Zach and his older sister, Cassandra, presented a check for colon and rectal cancer research to their mother’s oncologist, Jeffrey Meyerhardt, MD, MPH, co-director of the new Colon and Rectal Cancer Center at DF/BWCC.

"It was a great thing for both Zach and me," Jaworek-Lopes adds. "We have four kids, and my diagnosis was hardest on the two youngest – Zach, and 11-year-old Cassie. This gave him something he could take charge of and control."

Zach first had the idea when his class read about Malana Yousafzai, the Pakistani teenager whose demands that the Taliban allow girls to be educated earned her a 2014 Nobel Prize. Zach told his teacher, Kathy Caulfield, and school administrators that he wanted to "make a change" of his own revolving around colon cancer. Vice Principal Joel Barrett tasked him with devising a business plan during February vacation. Zach told Cassie, but they kept the project a secret from their parents.

"We just thought he was doing homework; he’d ask us a few questions, and then go off to his room," recalls dad Josh Lopes. "It’s hard to put into words how we felt when we found out. Let’s just say I want to be like Zach when I grow up."

At 8 a.m. on the Monday after vacation, Zach knocked on Mr. Barrett’s door with his plan. Soon, there were collection jars in every classroom at Cedar Elementary (Cassie helped with their design), posters throughout the school, and on March 4 – proclaimed "Dress in Blue" Day by the Colon Cancer Alliance – students and staff dressed in the disease’s official color, made blue carnations, and even decorated the teacher’s lounge in blue for a special breakfast served by pupils.

"I had an appointment with Christine that same day,” Meyerhardt recalls. "I’ve heard a lot of stories during the 15 years I’ve been doing this, but this one just left me speechless."

Addressing the gathering at the check presentation, Fuchs said that, "Fighting cancer takes a team approach that needs to start from the ground up. Zach’s incredible courage not only inspires us as doctors and researchers, but it inspires patients, too."

Christine, smiling as she watched Zach and Cassie play with the oversized check, said the experience "shows how much a 9-year-old can do if he is determined and has the help of his sister, classmates, teachers, and school administrators."

Plus a lot of love for his mom.