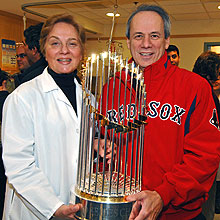 As a two-time cancer survivor, first at Dana-Farber in the mid-1980s, Boston Red Sox President and CEO Larry Lucchino has a unique understanding of the special relationship between the team and the Jimmy Fund. With this in mind, he, Red Sox Principal Owner John Henry, and Chairman Tom Werner have focused during their tenure not just on bringing World Series championships to Red Sox Nation — a goal accomplished three times and counting — but also to assuring the ties between these two New England institutions stay strong.

"One of the first things John Henry and I did on the morning after our group got Major League Baseball approval to buy the Red Sox was to visit the Jimmy Fund Clinic,” recalled Lucchino. “I wanted to reestablish immediately my personal connection and to introduce John to the people and personalities there. If you’re not touched by what goes on at the clinic, you’re not truly alive.”

Since their first year in Boston in 2002, Lucchino, Henry, and Werner have worked to deepen that connection. Starting that summer, the WEEI/NESN Jimmy Fund Radio-Telethon debuted live from Fenway Park and has since become one of Dana-Farber’s most popular annual events. Every August, Lucchino, his partners, and Red Sox players and coaches all appear live during the event's two-day broadcasts alongside Dana-Farber patients, doctors, nurses, and other staff. The 2013 event alone raised more than $3.4 million for the Jimmy Fund and Dana-Farber.

In addition to continuing the visits by players, coaches, and other team personnel to Dana-Farber throughout the year, Lucchino and his partners were instrumental in starting two more wonderful traditions. Each winter, teenage patients from the Jimmy Fund Clinic and their caregivers travel to spring training to meet with Red Sox players, see a game at JetBlue Park, and even hit and field on the same diamond as their big-league heroes. Then, during the regular season, the clinic group hits the road again, this time flying to a Red Sox away game at a different big-league ballpark.

In April of 2016, Dana-Farber Cancer Institute appointed Larry Lucchino Chairman of the Jimmy Fund. Lucchino has long been a supporter, leader, Trustee, and patient of Dana-Farber, which twice helped save his life from cancer over the last 30 years. For the last 14 years, he has been President/CEO of the Boston Red Sox, and, after the 2015 season was named Boston Red Sox President/CEO Emeritus.